Donald Kinsey Talks about Peter Tosh and Bob Marley.  Donald played on Bob and Peter LP's and toured with both.
I started seeing that the music needed to go somewhere. I started  becoming interested in wanting to be part of the music from a track  standpoint of view – from the very first creative impulse. Like on this  last album, the Mama Africa

album, I requested from Peter that I be able to be there from the  moment of laying the tracks, because I feel that’s where it’s all that,  man. If it’s not there in the tracks, it’s not really there. And so when we was doing that album, the producer Chris Kenzie came up to me – we  were staying at the same house – and he asked me what if Peter did a  version of “Johnny B. Goode

.”  When he first said it, I had to just think for a minute. I said, “Well, a lot of rock and roll groups have done a version of ‘Johnny B. Goode,’  and they did it just like Chuck Berry did it. If Peter did it, there  wouldn’t be nothing there that would remind you of the original ‘Johnny  B. Goode,’ other than maybe some hot guitar licks.” 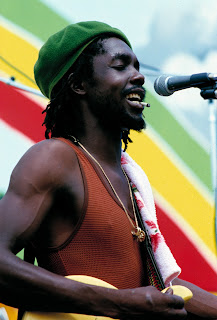 So I sit down and try to work out an arrangement. And it turned out  we came up with a pretty nice little arrangement and presented this to  Peter. For a long time, Peter didn’t want to do the song. For whatever  reasons, he wasn’t into doing somebody else’s song. I don’t know what it was. There would be a lot of other Rastamans around that would just  tell him that he don’t need to do somebody else’s song. “You don’t need  to do some rock and roll tune, man.” But I felt that the tune really had something in common with Peter. Peter’s from out in the country – you  know what I mean? We changed a few of the lyrics around, like saying  “deep down in Jamaica close to Mandeville, back up in the woods on top  of the hill,” for it to really be Peter. Instead of being the leader of a rock and roll band, he’d have a reggae band. But, man, it was  difficult. He did not want to do this song.

And this is an example of some of the things that I contributed, in a sense, to the music. Some people felt it as being “diluting the purity  of reggae.” But I don’t see it that way. And “Johnny B. Goode” was a  pretty nice record for Peter Tosh. After he finally laid the vocal  track, it ended up being one of his favorite tracks.
After Smile Jamaica Concert in Dec. 1976 Donald left the Wailers and joined back up with Peter.
That’s when I hooked back up with Tosh, yeah. But between that I  came back home and did a couple of things with the Staple Singers – we  toured. I also started putting together this group the Chosen Ones –  that was with my brother Ralph and Joe Thomas on bass guitar, Ron Prince on guitar, Michael Robinson on guitar. I was into guitar! [Laughs.] And eventually we had John Harris on keyboards. We recorded an EP [Don  Kinsey & The Chosen Ones], but that was after I did Peter Tosh’s Bush Doctor

I got a call from Herbie Miller, Peter Tosh’s manager. I met them up  in Woodstock because they was rehearsing for the Rolling Stones tour  there. The Stones really was into Peter, man. Peter was finishing his  Bush Doctor album there at Bearsville Studio, and the Stones was  rehearsing for the tour there. So we went up there and Robbie  Shakespeare, along with Peter, was producing. That album had a couple of hot tracks on it – I kind of liked it – plus I liked the fact of being  able to do some tracks with Keith Richards. He played on the album too.

Did you accompany Peter Tosh on the 1978 Rolling Stones tour?

Yeah. That was really great, man. I had fun doing that. Usually by  the end of an album, I would end up doing the tour. We didn’t start the  tour – I think the Stones was already out like a week or two before we  actually started it. But that was an experience man, I’ll tell you. The  first show we did was in Philly, I think. You get over 100,000 people at that big stadium. These people was there to see the Rolling Stones,  man, and we was up on that stage. It was the first time I’d been in a  situation on that level. We first came on, and we got a few apples up  there on the stage, a few cans. This happened for about maybe 15  minutes. Mick Jagger eventually came out on the stage and he made a  statement, which was really nice. He said that we was invited on this  tour as his guests, and he told the people to just cool out, sit back,  and get into the music. After doing that, we struck into “Don’t Look  Back,” which was the record that they had did together on the Bush  Doctor album.

Mick Jagger was up there singing with you?

Right. That tour there really exposed reggae to a wider audience. We  started out with them on the East Coast, and out of the whole tour we  must have did about 15 shows.

Did you ever join in during the Rolling Stones’ set?

Most of the time they was onstage with us. They wouldn’t do it every  place, but every now and then they would do the “Don’t Look Back” tune.  See, Peter was on Rolling Stones Records too. Keith wouldn’t come out  too much. I was hoping that he would, because there was one tune that we actually played on together, which was the title track “Bush Doctor

.”  Keith wouldn’t come out too much, but Mick would, and he would play  guitar too. I had the pleasure of singing “Happy Birthday” with Mick on  that tour. [Laughs.]

Did Peter Tosh’s Mama Africa album come next?
The next thing that happened was Peter was doing a tour for the Wanted Dread or Alive

album, and he called me out. I didn’t play on the album, but I did the  tour with him on that. Then after that we started working on the Mama  Africa album, and Betty Wright was sent down to do some background  vocals with us. Betty and I spent quite a bit of time together, getting  the backgrounds on that Mama Africa album. Her manager knew about my  background on the reggae scene, and they wanted to try to take her out  of the Clean Up woman thing and put her into a more now type of  situation. So her manager came up with the idea of me and Marlon Jackson coming together and producing an album with her. That was Betty  Wright’s Wright Back at You

album. I played on it and co-produced two of the songs. On that album,  she did two of the songs that my brother and I wrote. I think it’s a  real nice album, but the record company didn’t do too much with it. She  was pregnant during the time, and by the time the record came out, I  think she was pregnant again. The record didn’t really get too much  exposure. After doing the Betty Wright album, then we went out on tour  with Peter again on the Mama Africa album. After Mama Africa, I came  back and we did dad’s album.